City Debates 2019: Urban Recovery at the Intersection of Displacement and Reconstruction

In today’s world, where violent conflicts are widespread, an unprecedented rate of one person every two seconds is forcibly displaced. According to the United Nations High Commissioner for Refugees (UNHCR), conflict uprooted a record number of 3 million people in 2017 making it the biggest increase ever recorded in a single year. Displacement and reconstruction are more critical than ever with the total number of displaced worldwide reaching 68.5 million by the end of 2017.

Reconstruction and displacement have two independent scholarly trajectories that do not often intersect to enrich either discourse or challenge one another. While reconstruction is often confounded with the physical recovery of ruptured urban spaces, displacement emerges as a human-centered discourse. It encompasses the social and temporal dimensions of human migration towards safety and shelter and is not spatialized enough. While reconstruction has long been debated, its intersections with protracted and mass displacement call for more critical conversations. And while displacement has occupied a central focus in research across historical, urban, anthropological, geographical, and cultural studies, emerging threads call for more interdisciplinary reflections. The conference will explore narratives of displacement and modalities of reconstruction and focused on their thematic intersections and overlaps. The theme will be addressed through multiple lenses such as time, space, locality, gender, sectarianism, and memory. 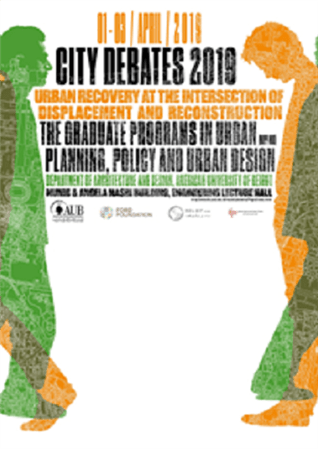