Waiting for Urgency in Beirut

Lebanon, Beirut, Post-war Reconstruction
In Lebanon, crisis is precluding urgency. While it seems everywhere, crisis as descriptor has produced inertia, inaction, and elite indifference to everyday plight and precarity. That may be what is most shocking of all—the complacency with which the wielders of political power, the disaster-makers, live.
Share Print
Disaster is disorienting even when you know where you are. In the immediate aftermath of the Beirut port explosion last summer, it was impossible to know its reach. How far did the destruction extend? What were its boundaries?

From the western edge of Hamra to the eastern edge of Karantina, there was not a building untouched. Broken glass was the most visible sign of impact across the nearly six kilometers; it punctuated curb sides and street corners for days, becoming the clichéd descriptor onto which so many post-blast reflections latched. The urban effects of the explosion, however, were far greater in scale and scope.

The most affected areas were north-facing districts with unobstructed views of the coast and the port—an exposure that on any other day would have been desired, not feared. But the force of the blast extended across the city and as far as 17 kilometers out, rivalling that of some earthquakes. This spread prompts consideration of the explosion’s less visible effects, such as the structural damage to hundreds of buildings documented in the ensuing weeks by the Order of Engineers and Architects. This is to say nothing of the psychological impacts that, while not always hidden, often defy empirical calculation.

The explosion necessitated exploring the historical forces that produced this calamity. The event brought into stark relief a political economy of the city that has remained stubbornly durable despite, or because of, the urban disparities it has created. It is these conditions from which the blast stemmed. Put differently, 4-8-20 was not a natural disaster, it was a political one.

Last fall, a team of researchers at the MSFEA Beirut Urban Lab began a project to address the effects of the port blast. Two initiatives within the project are grounded in short-term needs and medium-term considerations of neighborhoods and residents most affected by the explosion. The project’s third initiative—Visioning the City in the Post-Blast Period—is longer term and aims to produce a set of guiding principles and shared vision for the recovery and reconstruction of Lebanon’s capital city.

Underpinned by a series of virtual roundtables held between November 2020 and January 2021, in partnership with Columbia World Projects and the Post-Conflict Cities Lab at Columbia University, this third initiative explores seven distinct but linked urban matters. They include: neighborhood connectivity; heritage preservation; port reconstruction; environment and climate; housing and land policy; governance; and activating public space. These issues complement one another in theory and practice—housing policy is to a great extent about governance, environment is in part affected by the amount and accessibility of open public space, and so on.

Participation in the roundtables was similarly connective. The meetings brought together local residents, Lebanese citizens in the diaspora, and people living in and working on different places—Chile, Haiti, India, Puerto Rico, South Africa, and others. Across these geographies, participants were linked by a collective commitment to advancing a people-centered approach to urban vitality. Such an approach does not merely grow out of unexpected disasters, like a spontaneous reaction to earthquakes and tsunamis and their widespread impacts. Rather, this approach is an active political orientation rooted in increasingly intolerable histories of rule—conditions implicated in disastrous eruptions like Beirut’s last summer.

In the different roundtables, participants consistently pointed to political-economic and social-spatial conditions that were structural precursors to and of the port explosion. It is these longstanding conditions that must be addressed in any reconstruction and recovery process for the city and the country.

One disaster that predates the port explosion is the financialization of land through real estate speculation and property development. As both urban process and effect, the wringing of profit from property has generated windfalls for a host of elites—the proponents of land-use policies that have paradoxically created high vacancies and high rents. These efforts have also helped to facilitate the social-spatial atomization of everyday life in the city. Decisionmakers have privileged private interests over public needs, such as increased access to open urban spaces and enhanced public utilities.

A second, more nuanced condition that participants pointed to relates to the outsized role of imports in Lebanon’s economy. As is widely known, close to 80% of country’s imports was entering through Beirut’s port at the time of the explosion. Less discussed, however, are the ways in which economic policies and practices actually hinder—or ‘penalize,’ as one participant argued—Lebanese exports. A lack of export incentives including public investment in local industries contributes to circumstances where disproportionate levels of imports are incentivized, preferred, and fixed in the national economy.

Such a political economy is not unique to Lebanon. The financialization of urban space, and the ‘de-development’ of local economies, are characteristic of a host of settings in both the global south and north. But what Beirut and other Lebanese cities and towns have been facing over the last 18 months feels unparalleled.

A local business located on the ground floor of a structurally damaged heritage building in Gemmayzeh in the aftermath of the port blast on August 4th. (Photo: Luna Dayekh) 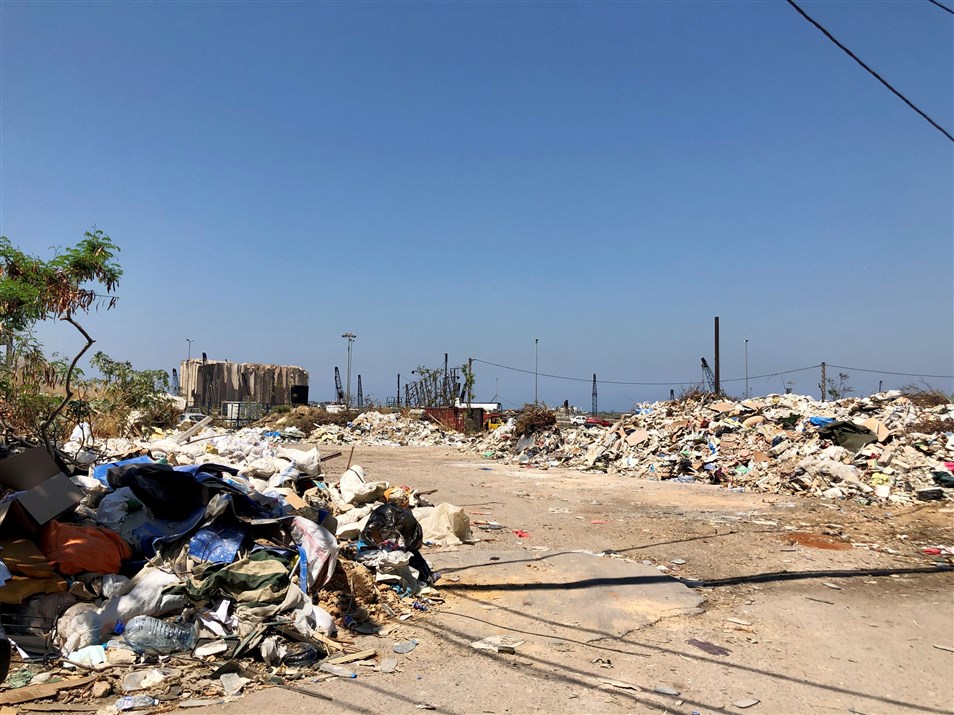 The port and accumulated waste on the sides of the street as seen from Mar Mikhael. (Photo: Luna Dayekh)

National bankruptcy, currency collapse, hyperinflation, pandemic, infrastructural breakdown, explosive infrastructure, political indifference. A confluence of crises, we are told, is today wracking Lebanon. But the term ‘crisis’ is imprecise and problematic. For one, it conjures an erroneous timescale. Crisis describes a sudden event more than historical, festering, and penetrating lived conditions. The term evokes a moment that was virtually unforeseen, even unpredictable, when just the opposite is true.

Crisis also seems to demand exceptional, quick-action solutions—or, policy conjunctures. The descriptor is sold as an ‘opportunity’ for bold and exceptional governmental action, such as a national stimulus package and its set of structural adjustment and others. But as an analytic, crisis does little to capture how long it took to reach crisis, and the impacts of decisions taken along the way. Finally, as an utterance, the c-word rarely foregrounds how the precarious everyday, past and present, foreshadows what is being lived and what is to come. The collapse of the Lebanese lira is a useful example.

The lira’s fall against the US dollar has been jaw-dropping. In March 2021 alone, the local currency had for weeks held at roughly 8,800 lira to the dollar. And then, in a fortnight, it dropped to 10-and-then-12-and-then-15,000 lira to the dollar. The national monthly minimum wage of 675,000 LL—18 months ago worth 450 USD—was now worth 45 USD, or one-tenth. The fall was shocking, though expected. But the expectedness is also itself shocking, because knowing that monetary collapse was imminent had no effect on actually preventing it.

Activists, academics, and representatives of the most neoliberal international financial institutions have for years been sounding economic alarms in Lebanon. Even more recently, since the first swing away from the lira-dollar peg at the end of 2019, local economists predicted a 15,000-lira to the dollar rate was inevitable if nothing was done to change economic course. The use of ‘crisis’ is thus paradoxical in Lebanon when nothing is done to thwart its deepening. 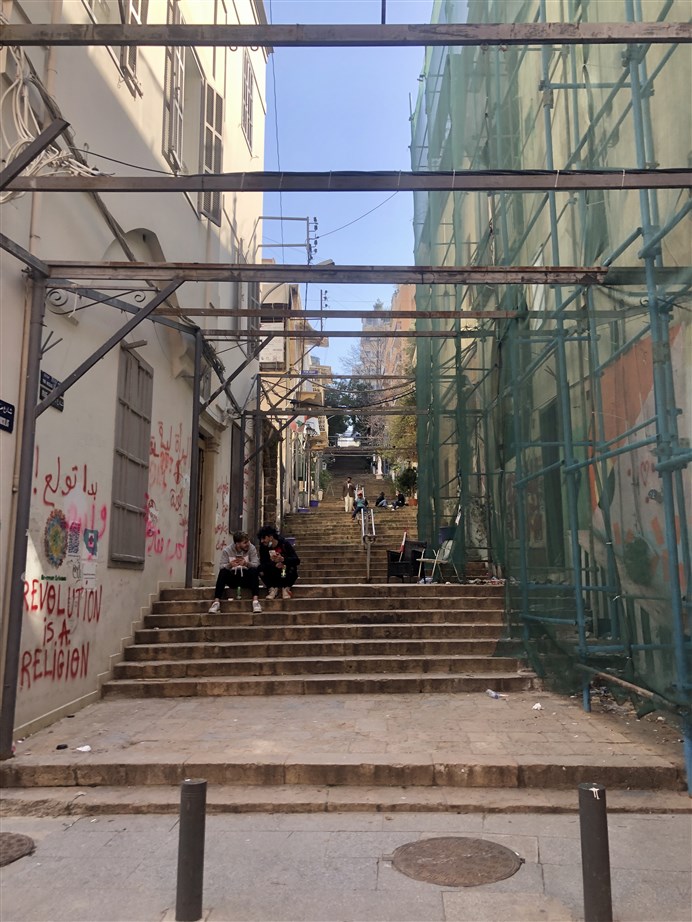 Young people hanging out on the stairs of Gemmayzeh. (Photo: Luna Dayekh) 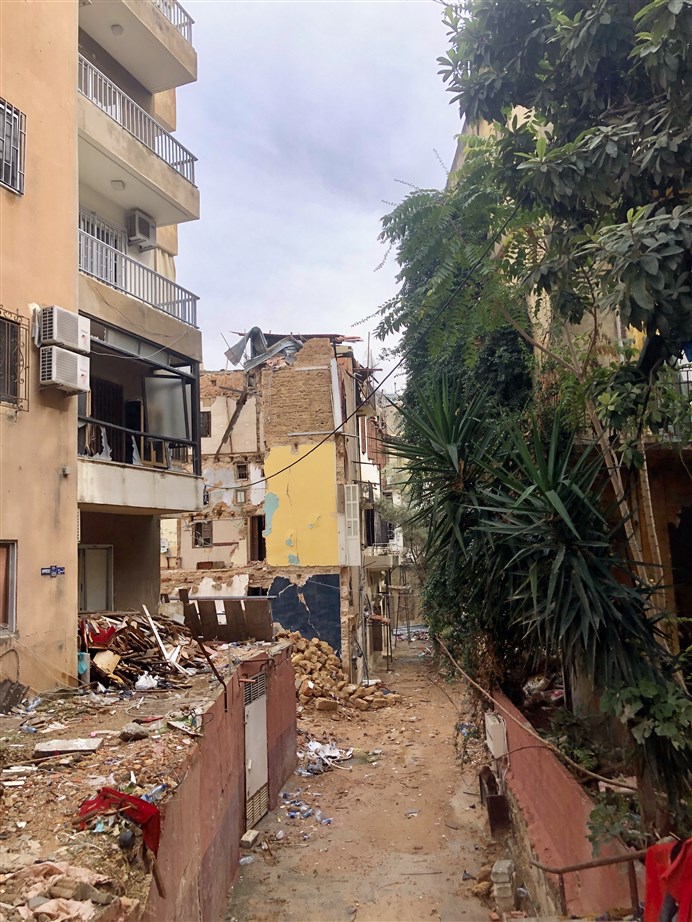 Ongoing monetary demise is not a crisis but a condition. Specialists on Lebanon’s economy have long insisted that the roots of the collapse date back years and can be traced to the country’s tiny club of elites who have fared financially best. The roots of the port explosion are similarly political and stretch to an exponentially longer timescale than the mere seconds it took to destroy whole parts of Beirut. Thinking and speaking of these events as stemming from common conditions may help move them away from the language of crisis. Not because the moment is hardly urgent, but precisely because it is.

In Lebanon, crisis is precluding urgency. While it seems everywhere, crisis as descriptor has produced inertia, inaction, and elite indifference to everyday plight and precarity. That may be what is most shocking of all—the complacency with which the wielders of political power, the disaster-makers, live.

While living conditions continue to deteriorate, long-standing prescriptions to collective problems remain available. The political action needed to implement them feels both impossible and never more necessary, urgent, existential. The alternative is not crisis but a continuation of catastrophe.
Omar Sirri is a PhD candidate in political science at the University of Toronto, and an affiliated scholar with the Issam Fares Institute for Public Policy and International Affairs. He is also an affiliate with the Beirut Urban Lab and has contributed research and writing for the roundtables that underpinned Visioning the City in the Post-Blast Period.