Activities with the Order of Engineers and Architects in Beirut (OEA)

Beirut, Post-disaster Reconstruction, Mapping, Urbanization, Open Data
The Beirut Urban Lab and the Order of Engineers and Architects in Beirut have agreed to share data and knowledge about Lebanon’s changing urbanization. The first pillar of this partnership is the Beirut Built Environment database, which maps all building developments within Municipal Beirut since 1996.
Share Print

A Database for All

The Beirut Urban Lab (BUL) has partnered with the Order of Engineers and Architects in Beirut (OEA) since 2018 to exchange data and analysis about Lebanon’s changing urbanization. The data obtained from the OEA has allowed the BUL to identify the locations of all  building permits filed in Beirut between 1996 and 2019. This data was critical for BUL to establish the Beirut Built Environment Database (BBED), an open source dataset displaying information about contemporary urbanization in Municipal Beirut. The base map used for Beirut was developed by BUL in partnership with the Lebanese National Council for Scientific Research (CNRS).

BBED responds to the lack of accessible data about the built environment in Lebanon’s capital city. The BUL team surveyed all 2,870 lots where building permits were filed at the OEA (1996-2019). The research team collected information about the construction status, as well as several physical, environmental, and social characteristics of these buildings. The findings were mapped and visualized. The BUL shares its findings and base maps with the OEA’s digitization unit. In addition, many of the outputs are were placed online and made available publicly in the form of a user-friendly open source downloadable databases.

The BBED online platform includes an updated base map of all buildings, parcels, quarters, and regions within Municipal Beirut with locations of known gardens and landmarks. Out of Beirut’s 18,340 mapped buildings, we identified in 2019 the construction status of 2,870 buildings permitted between 1996 and 2019. Out of the 2,870 buildings, the dataset shows ground floor usage of 1,633 residential buildings. It further shows environmental indicators from rooftop uses of 1,133 residential buildings with distributions of solar panels, rooftop landscape, and rain-water collection systems.

OEA engineers, architects, and volunteers were granted access to the BBED base map developed by BUL and CNRS before the official online launch. These base maps were used in the weekly surveys of OEA’s Beirut Explosion: Weekly Buildings’ Assessment Reports. The base map was also used by INGOs, NGOs, and governmental institutions working on post-blast recovery in the areas affected by the port blast. 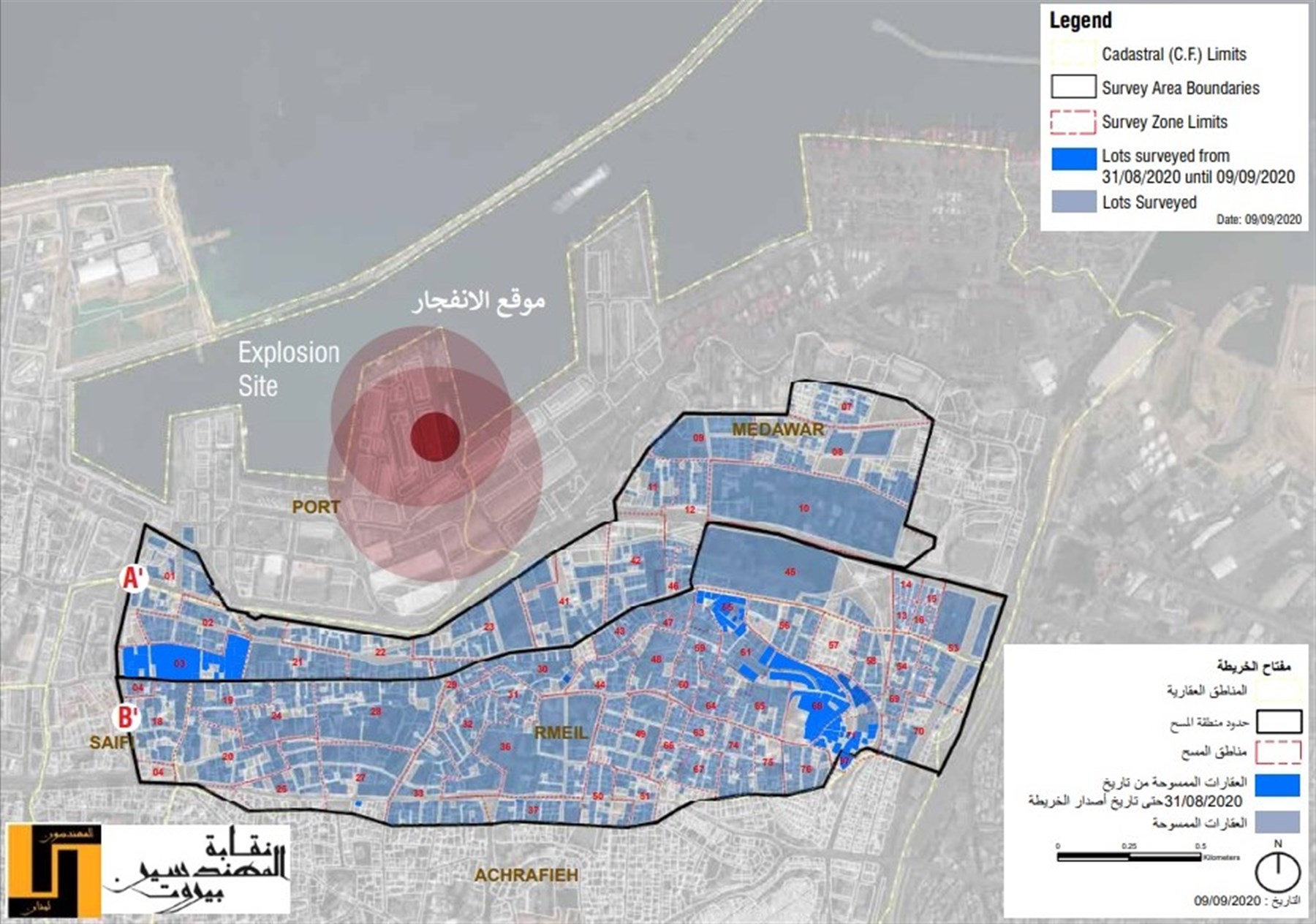 BBED will continue to be updated through surveys of buildings that were under construction during the previous surveys. In addition, surveys are being launched in the coming months to cover permits filed in the OEA of Tripoli for Beirut and to extend the survey to the 385 buildings permitted between 2019 and 2022 in Municipal Beirut.