Actors and Governance of the Beirut Port Blast Recovery 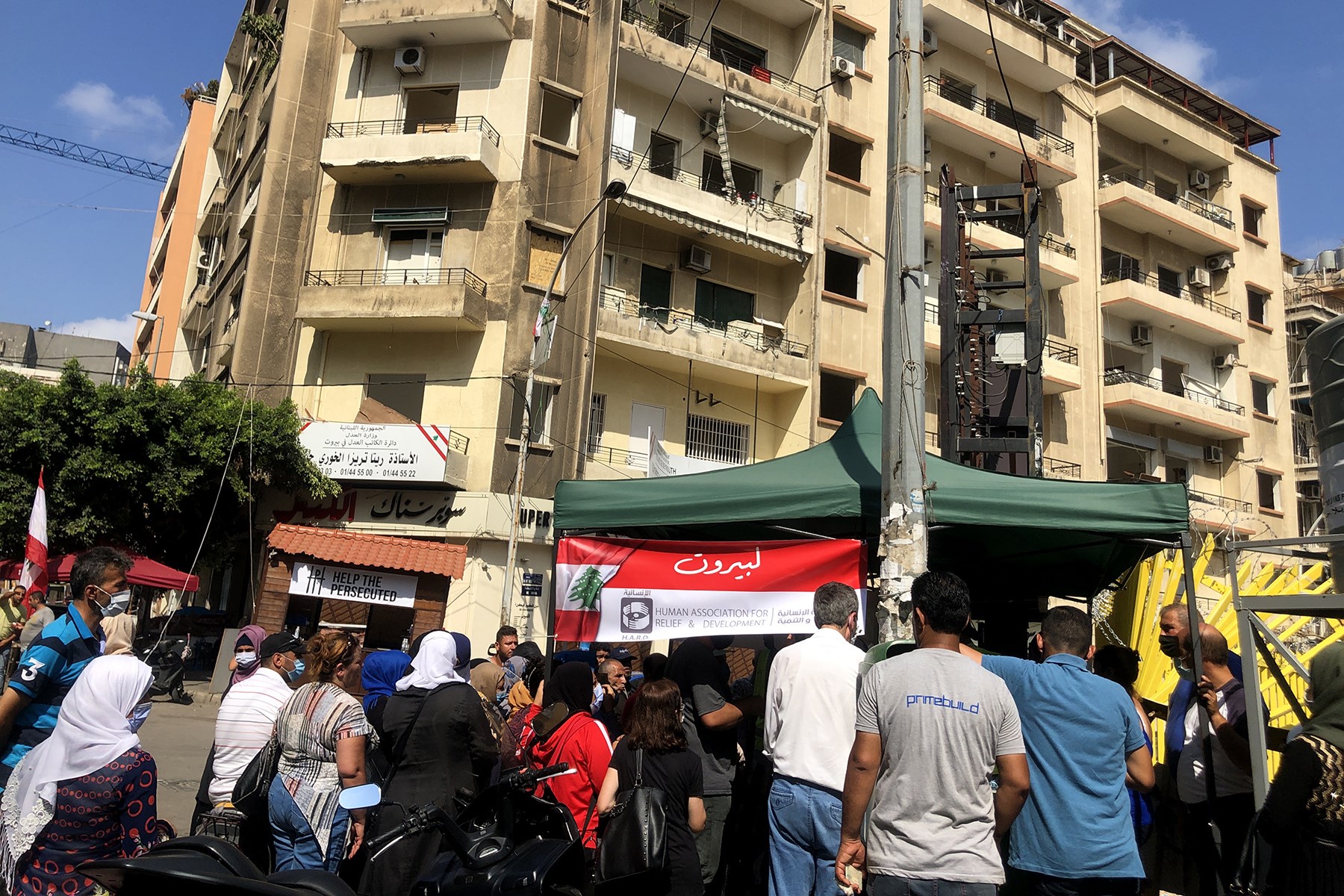 A group of people gathered around an NGO tent offering goods or services to residents affected by the port blast in Mar Mikhael (Photo: Luna Dayekh, August 2020).
The Beirut Urban Lab (BUL) and The Policy Initiative (TPI) have partnered to investigate the governance modalities and dynamics structuring the urban recovery process in the aftermath of the criminal Beirut Port Blast of August 4, 2020.

The investigation broadly interrogates the role of the Lebanese state/political system, taking the Port Blast response as its case-study. This project is funded by the IDRC. This response is not the first “post-” reconstruction/recovery of Lebanon, which has been the notorious site of multiple conflicts and associated disasters for long decades.
Share Print

But, this time, recovery is not championed by a billionaire prime-minister like Rafic Hariri able to attract transnational capital flows to the country; nor is it led by a powerful political-sectarian party like Hizballah dominating its stronghold and imposing its authority. This time, recovery is happening in the aftermath of uprisings that have swept the country demanding the fall of the oligarchs, of a criminal blast that furthered the delegitimization of the state, and of interlocking crises that have aggravated the dysfunctions of the state’s apparatus.

As with each reconstruction, international aid did mobilize to support Lebanon, but this time, donors are not as keen as they used to be to provide a lifeline to the state, amidst an unaccommodating geopolitical context. As such, aid is scarce, conditional and restrictive, rather than providing rents that can be captured.

The BUL-TPI study on actors and governance of the Beirut Port Blast is articulated along two tracks:

(1) The first track explores the Reform, Recovery, and Reconstruction Framework (3RF) and its associated Lebanon Financing Facility (LFF) established by the consortium formed by the World Bank, UN-agencies, and the EU. Lebanon’s 3RF is distinguished by its institutionalization of CSOs’ engagement through the establishment of a Consultative Group (CG) including 16 CSOs (selected after a call for interest that drew more than 50 applications). Two sets of hypotheses guide this exploration:

• The 3RF’s structure includes adaptive and effective institutional arrangements that may disrupt path dependency —namely its CG.
• Yet, the 3RF is: (i) consolidating CSOs’ fragmentation in Lebanon, through the composition of its CG; and (ii) providing insufficient modalities for CSOs to work collectively in coherent and effective ways towards reform and to hold donors and government accountable.

This track uses a mixed-methods approach, relying on primary data from key informant interviews, and on participant observation. Additionally, it relies on secondary data from reviews of grey literature related to aid architectures in areas of limited statehood.

(2) The second track maps the actions and interventions of multiple actors at the neighbourhood scale, in the areas affected by the Blast. This analysis builds on the political economy of relief literature and sheds light on the relationship that exists between types of actors, choice of goods provided, and selection of beneficiaries. Preliminary findings, based on a sample of 261 actors, reveal that 31% of the actors are religious, political or sectarian (including 21% FBOs), while 69% are non-sectarian. This track builds on the literature on the provision of low-value and high-value goods in times of crises, and posits these two hypotheses:

• Actors are providing diverse types of goods to individuals, across neighbourhoods, varying between low-value and high-value particularistic goods as well as between low-value and high-value collective goods.
• Actors are distributing diverse types of goods for a range of ends: clientelism, political gain, entrepreneurship, publicity, and/or altruism.

Methods here are also mixed and rely on qualitative and quantitative tools including a survey questionnaire, in-depth interviews, participant observation, mapping and desk research. The survey targets NGOs, INGOs, FBOs and CSOs, and assesses the following six components: (i) profiling of actors’ size and functionality; (ii) actors' operations on the ground; (iii) scale, scope, and impact of goods/services provision since the blast; (iv) modus operandi governing the selection of beneficiaries and target groups; (v) funding of operations; (vi) transparency, audit, and accountability.

The TPI-BUL project’s research for Track 1 is well-advanced and requires additional interviews and data collection that will be taking place during May-July 2022. For Track 2, the survey’s research design is in its final stages of completion, and data collection will be launched in May 2022. We thus expect to publish first results by the second commemoration of the Beirut Blast, on August 4, 2022, and more complete findings starting Fall 2022 throughout Spring 2023.