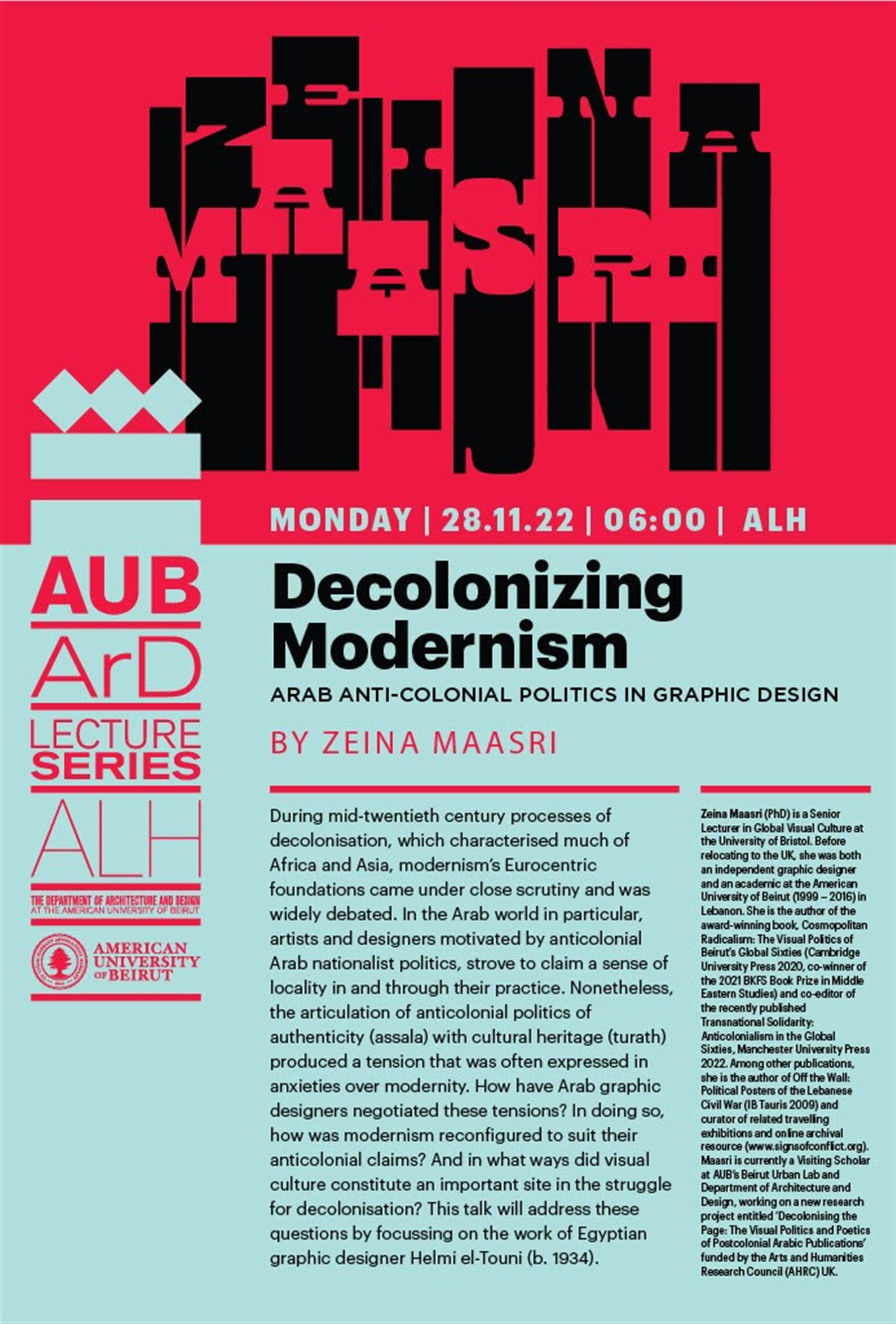 The Department of Architecture and Design (ArD) and the Beirut Urban Lab are hosting a public lecture titled:

During mid-twentieth century processes of decolonisation, which characterised much of Africa and Asia, modernism’s Eurocentric foundations came under close scrutiny and were widely debated. In the Arab world in particular, artists and designers motivated by anticolonial Arab nationalist politics, strove to claim a sense of locality in and through their practice. Nonetheless, the articulation of anticolonial politics of authenticity (assala) with cultural heritage (turath) produced a tension that was often expressed in anxieties over modernity. How have Arab graphic designers negotiated these tensions? In doing so, how was modernism reconfigured to suit their anticolonial claims? And in what ways did visual culture constitute an important site in the struggle for decolonisation? This talk will address these questions by focusing on the work of Egyptian graphic designer Helmi el-Touni (b. 1934).

Zeina Maasri (PhD) is a Senior Lecturer in Global Visual Culture at the University of Bristol. Before relocating to the UK, she was both an independent graphic designer and an academic at the American University of Beirut (1999–2016) in Lebanon. She is the author of the award-winning book, Cosmopolitan Radicalism: The Visual Politics of Beirut’s Global Sixties, 2020 (co-winner of the 2021 BKFS Book Prize in Middle Eastern Studies) and co-editor of the recently published Transnational Solidarity: Anticolonialism in the Global Sixties, 2022. Among other publications, she is the author of Off the Wall: Political Posters of the Lebanese Civil War, 2009 and curator of related travelling exhibitions and online archival resource (www.signsofconflict.org). Maasri is currently a Visiting Scholar at AUB’s Beirut Urban Lab and Department of Architecture and Design, working on a new research project entitled ‘Decolonising the Page: The Visual Politics and Poetics of Postcolonial Arabic Publications’ funded by the Arts and Humanities Research Council UK.