The Beirut Urban Lab: Adding an Anchor to the Ecosystem of Urban Change

How does one reframe the urban question in the context of multiple crises?

We launch the website of the Beirut Urban Lab at a time when everything around us is in peril. Thirty years after the presumed end of the civil war, Lebanon is drowning under the overlapping weights of a global health pandemic, a severe financial crisis, and the devastating failure to put in place a just and viable national recovery. Indeed, things are on the verge of total collapse. Even urban life, the stage of our actions and the substance of our research, appears unsettled. Images of apocalyptically empty streets and ghost towns are certain to inform the future collective memories of these times. Still, they are interrupted by outbursts of protests, as people in Beirut and elsewhere reaffirm their demands to live in dignity and justice, and to be free of discrimination. 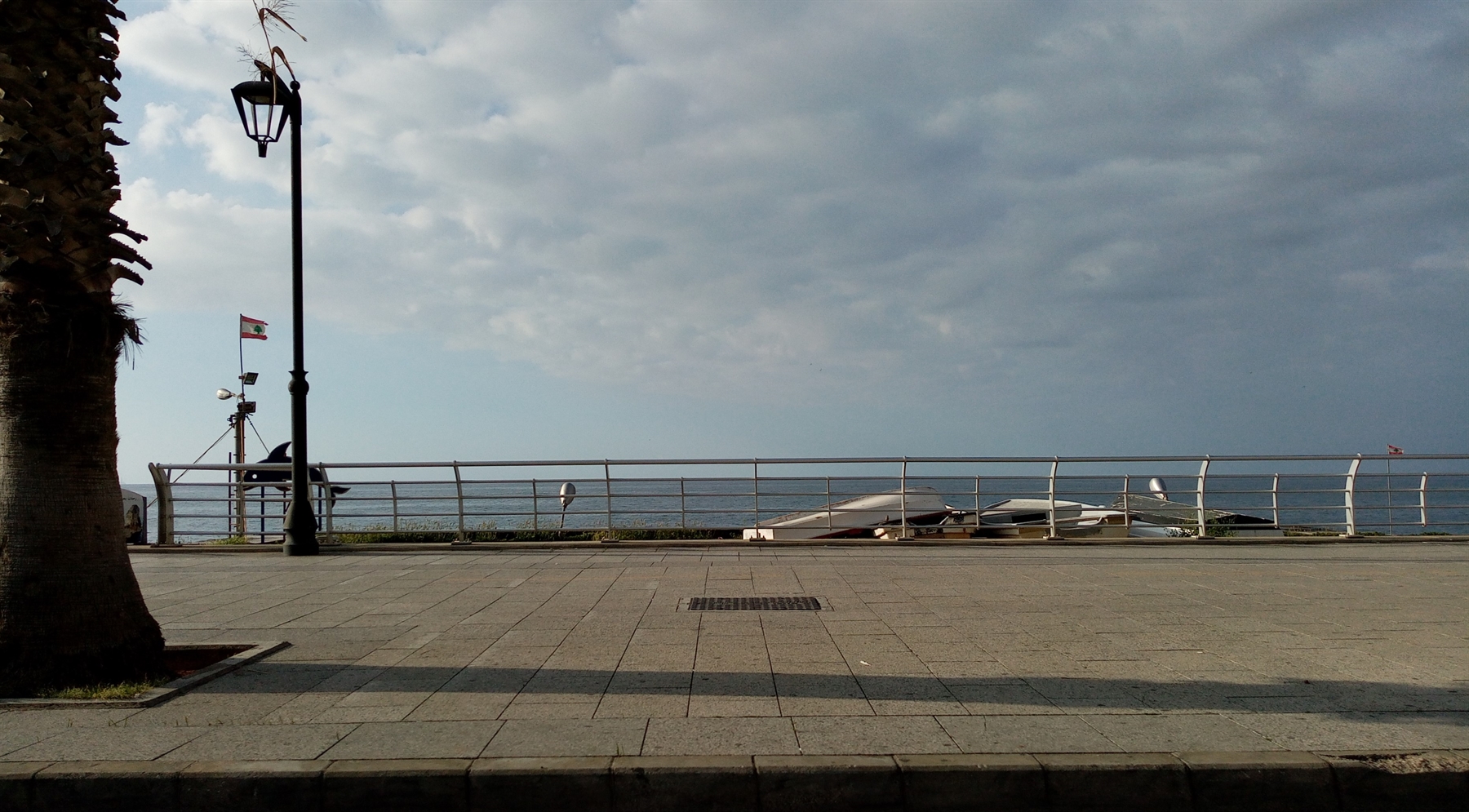 The Corniche, one of the busiest public spaces in Beirut, is completely empty during the lockdown (Photo: Dounia Salamé, April 2020)

How does one reframe the urban question in this context? Is the study of cities in its established form no longer relevant? Is the project of building an urban lab losing merit?

Much to the contrary, we find renewed interests in matters of urban rights, and urban livability, and more recurrence than ever to their vocabulary in everyday conversations as space is suddenly injected in popular lexicons with terms like lockdown, distancing, shelter-in-place, reclaim, and occupy infiltrating many daily conversations. Borders have never been more visible or more ready to seal the localities they delineate: country, state, city, town, neighborhood, camp, building, apartment and even room—all scales have become quarantinable. Moreover, open public spaces, vibrant streets and the social interactions they engender have gained new appreciations. Yet, as some experience in the closure of theaters, shops and restaurants a threat to their urban way of life, many others equate it with the loss of their livelihoods. Indeed, the already vulnerable populations who service these urban economies typically survive on the monthly wages that allow them to keep a home and secure food. They cannot afford to stay at home. These workers are typically low-income rural or foreign migrants, refugees, or impoverished middle classes who no longer find the resources or the space to carve a secure and protected life amidst the violence of the neoliberal economic model dominating our times.

In these overlapping crises, we find an opportunity to reflect on our own agenda and put to question our relevance. We also find in this renewed interest in the urban a valuable opportunity to engage with publics who have never been as ready to be part of the conversation. Thus, as the pandemic forces a realization, albeit fleeting and uneven, that societies are as strong as their weakest links, we want to seize the opportunity and contribute to render visible the slums, camps and dilapidated buildings that store the workers who service our cities and towns, and include them in policy. Indeed, a discussion of the urban cannot be reduced to mourning over the emptiness of the once glitzy exclusive downtowns and the silence of formerly vibrant shopping arteries. Never have our mappings and analysis of camps and informal settlements, our attention to the ravages of financialization and/or wars, or our studies of inclusive planning and integrated recovery approaches been more relevant. Furthermore, the momentum of a global crisis has allowed for local introspection in response to global causes. Thus, the current questioning of racial capitalism has brought more attention to the long-neglected crisis of migrant labor and the kafala system in our country. Similarly, we have had to reconcile how low-skilled laborers are swiftly celebrated as essential workers whose praises are so easily sung, while remaining tone-deaf to their increased struggles and unacceptable working conditions. We also have to recognize that many of them are migrants, mostly women, and disproportionately affected by the financial meltdown. 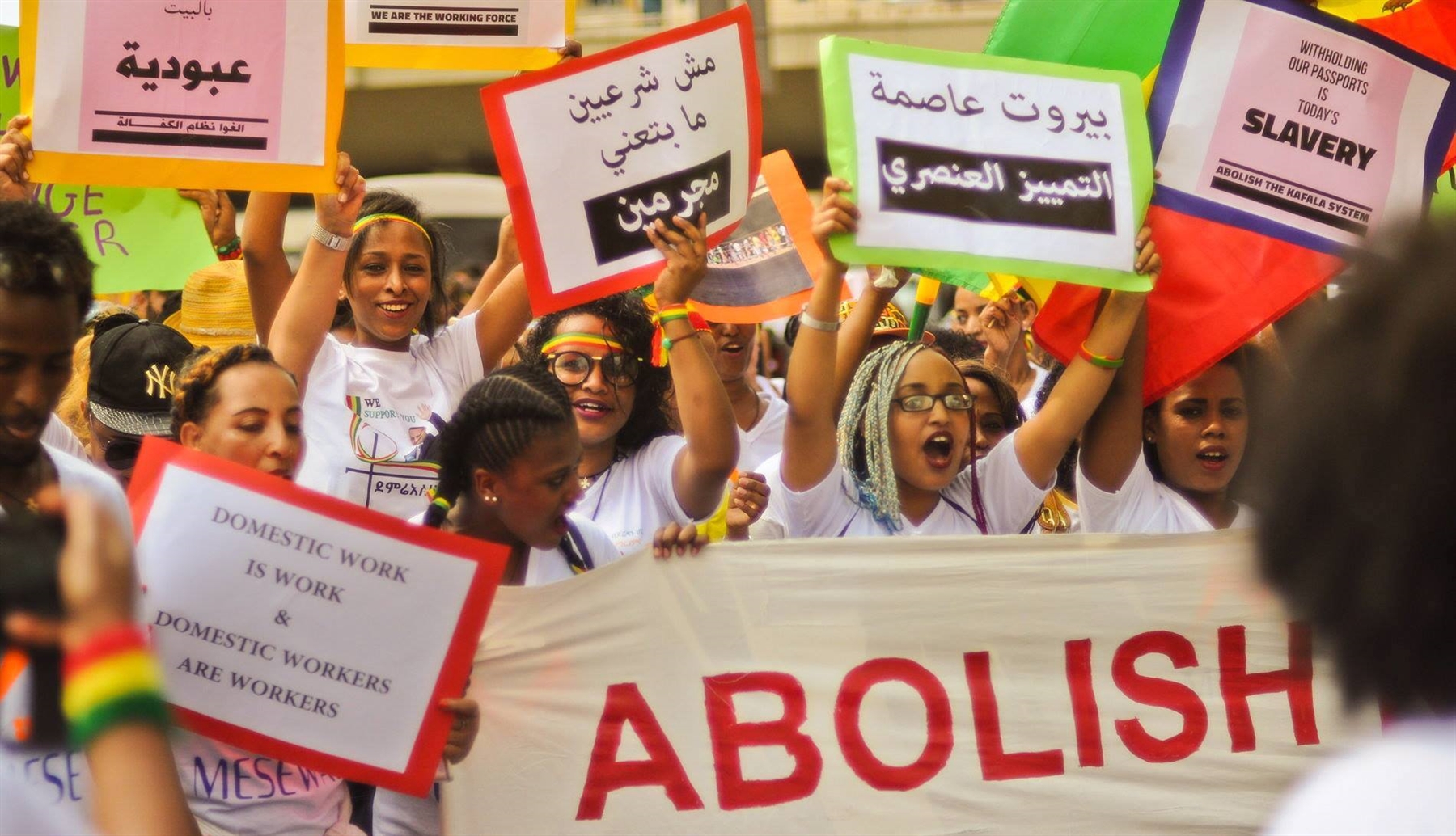 Potesters call for the abolition of the kafala system at the Domestic Workers' Day protest 2018. One of the signs read: "Beirut, the capital of racist discrimination" (Photo: Pat Sy, June 2018, published on Anti-Racism Movement's facebook page)

Against this context, we find the project of building an urban lab key to fueling an ecosystem of change, one that operates within the networks of academic and policy debates and journals, while also intersecting with the scales of our interventions in the cities and localities in which we conduct our studies.

One of our ambitions in setting up an Urban Lab in Beirut is to instigate south-south conversations and exchanges that can de-center the production of knowledge. We recognize the shared legacies and scars of the colonial past and present, as well as their lasting distortions and dependencies that generated noticeable convergences across our Southern contexts. We therefore seek to initiate discussions and encourage productive comparisons that work together to form coherent discourses about our changing urban condition and the questions it raises. Yet, we contest the dominant assumption that any locality is a variation of a presupposed norm (too often associated with the anchor cities of the West), and instead seek to unravel the complex entanglement of multi-scalar forces within our cities. Thus, we explore the materialization of financialization on housing from our standpoint in Beirut, looking at the influence and reverberations of the global patterns and practices associated with the ascendency of capital. We map the repercussions of this financialization in high rates of vacancy, disciplinary practices affecting the middle classes, and glaring urban inequalities, while remaining attentive to the intersections of these patterns with the social and political structures that characterize the organization of the studied city. Similarly, we are mapping Lebanon’s national response strategy to the COVID-19 pandemic in ways that enable a theorization of the state from below as an object of longing for some, a coveted bundle of assets for others, and a fragmented authority contested within and across territories. Rather than measuring the deficiencies of the Lebanese model of government or labeling it as a “failed state,” we seek to articulate bottom-up readings of the hybrid, largely informal, systems of governance and identify/document the little-acknowledged, often transient, experiments sketching alternative political imaginaries. Thus, we are aware of how territorial transformations are deeply connected to multi-scalar forces and flows that often trump the policy-making undertaken within public institutions. Consequently, we advocate for planning approaches and tools that recognize the ever-changing social and ecological dimensions of the built and natural environments. As for our work on post-war reconstruction in Lebanon, it is re-conceptualized through a holistic recovery framework that addresses all urban vulnerabilities and injustices, hence challenging the exceptionalism of the region. Thus, we understand urban recovery as a process triggered by different types of historical and contemporary ruptures and violence, and impacted by displacement, politics and power relations. It translates, in practice, into a participatory framework that is socially just and inclusive with projects envisioned consistently as people centered, heritage led, and place-specific.

Political parties sterilize streets, distribute aid, masks, and sanitation products in photos posted on their facebook pages. The workers are wearing logos and colors of the parties they are representing.

Our project of knowledge production rests on our anchored position within specific urban contexts in which we live, work, and interact. This forces us to address any research initiative reflexively, to locate ourselves within its context as learners and interlocutors. It requires us to pave the possibility for students to become research collaborators, for “respondents” to become co-producers (via peer- and auto-ethnography) and partners in the generation of knowledge that is locally anchored and meaningful. Yet, by beginning from the premise that the knowledge produced needs to be used, shared, appropriated, and modified in order to be meaningful, we want to challenge the restrictive constraints that prevent the valuation of citizen science. Moreover, we invest in mapping and visualization as critical tools of inquiry and powerful modes of communication that can widen the reach of our calls. We do so seeking to expand a tradition that has characterized our individual and collective research trajectories for the past decades in which we have—in addition to publishing academic work—produced lay and journalistic material, written op-eds, led discussions in public squares, contributed to small town halls and community meetings, and sought occasions where we could place our research tools at the service of the communities with which we work.

Ultimately, we aim for the Beirut Urban Lab to become an important anchor within the region’s ecosystems of urban change. We want to generate knowledge that consolidates and furthers synergies and networks among activists, researchers, and professionals of the built environment, in ways that forge shared perspectives and translates the values of justice and ecological responsibility into tangible pathways. Whether it is about fulfilling the right to housing or landscape, recovering from the devastating effects of war or ecological ruin, or devising models of inclusive and just governance, our aim is to produce informed, evidence-based knowledge that is accessible and usable for advocacy and policy making. Our hope is to set in place a new political imaginary within which the urban is an integral element of a direly needed revolution.