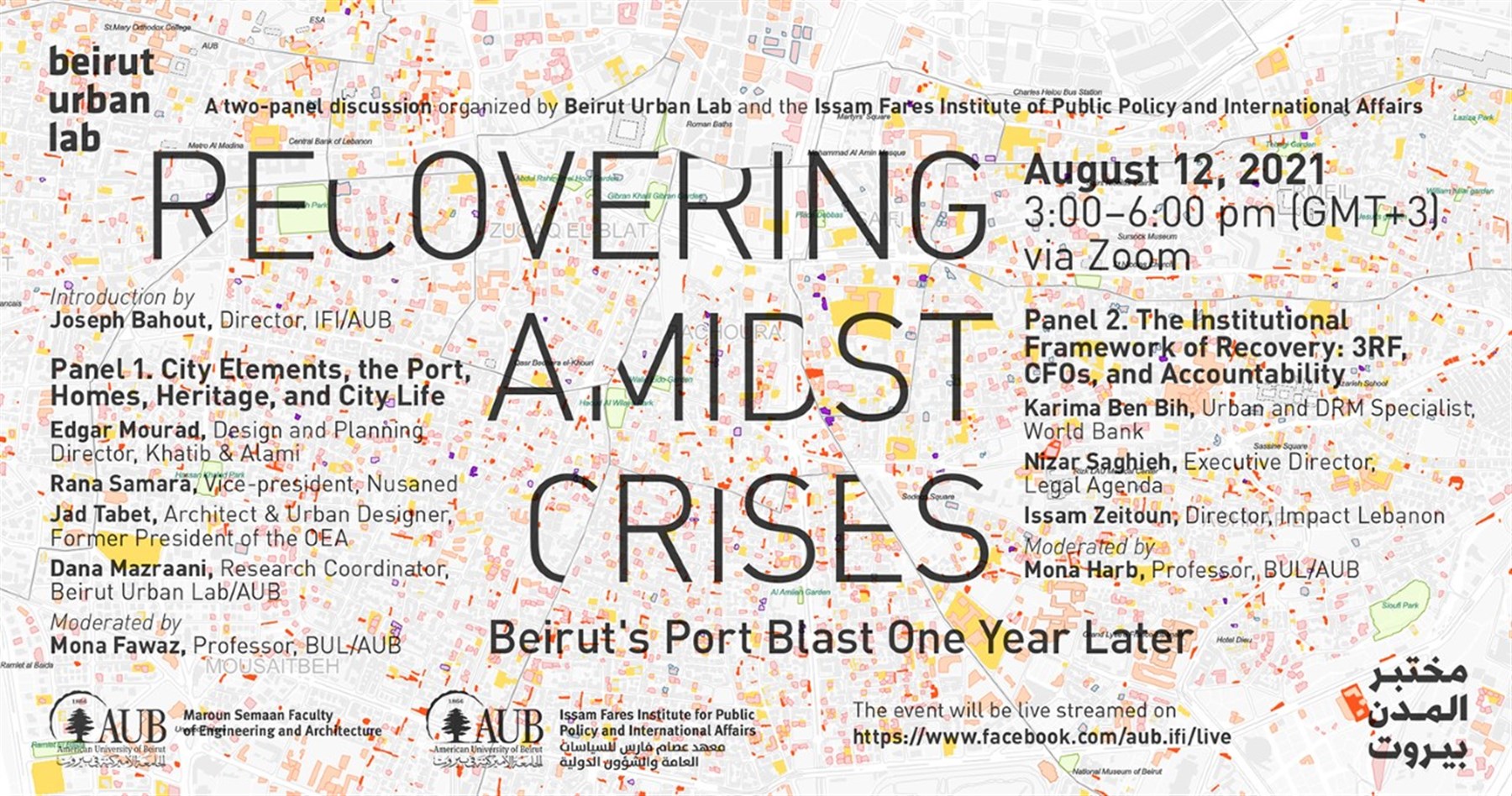 Panel 2: The Institutional Framework of Recovery: 3RF, CFOs, and Accountability

This event will be held in English.

Share Print
This webinar is hosted jointly by the Beirut Urban Lab and the Issam Fares Institute for Public Policy and International Affairs (IFI). It's a two-panel discussion that will take stock of the multiple efforts that have been deployed in the past year to initiate processes of repair and recovery in response to the damage incurred by the blast: actors, sectors and institutions. It will further outline current scenarios of recovery and lay out visions for desirable futures.

Rana Samara is an architect and founder of Rana Samara design studio based in Beirut, Lebanon. She’s also the co-founder of an award-winning design studio, Polypod, a collaborative practice with a focus on designing architecture, interiors, and branding that emphasizes cross-disciplinary sharing and exchange of design ideas for private and public clients. Prior to that she was a consultant on sustainable development at the United Nations Economic and Social Commission for Western Asia, and contributed substantively as a member of the Sustainable Development and Productivity Division. Rana has bridged her design practice with academic teaching as Senior Lecturer at the Department of Architecture and Design at the American University of Beirut since 1999, and from 2014 to 2016 at the School of Architecture and Interior Design at the Lebanese American University.

Jad Tabet is the co-founder of Tabet Architects and Planners Workshop, and former President of the Lebanese Order of Engineers and Architects (2017-2021). Both in its Paris and Beirut offices, his company develops a specific expertise in the fields of historic urban landscapes, rehabilitation and revitalization of traditional urban fabric, social housing and public facilities. During his long career, Tabet has conducted several projects in the fields of historic urban landscapes, development of strategies for sustainable community growth, and heritage protection in Lebanon and the Arab world. Born in Lebanon in 1944, Tabet holds a Bachelor’s of architecture from AUB and PhD in urban planning from Paris University.

Dana Mazraani is an urbanist and architect. She holds a double master’s degree in international cooperation in urban development and planning from Université Grenoble Alpes and TU Darmstadt. Her current projects are focused on Beirut’s post-blast recovery and on examining ways of reclaiming public spaces and vacant properties in the city for shared use. Her previous research covers inclusive design, urban informality, and the transformation of Beirut’s relationship to street and outdoor life.

Karima Ben Bih is a Young Professional currently working with the Disaster Risk Management and Resilience team in Middle East and North Africa (MENA) Region of the World Bank’s Social, Urban, Rural and Resilience (SURR) Global Practice. She holds a PhD in architecture and urban studies focusing on post-disaster reconstruction of dense agglomerations, a Master’s in architecture with focus on shelter design, and has worked on housing policy and urban disaster risk management with international NGOs and international organizations.

Nizar Saghieh is a Lebanese lawyer and researcher who co-founded the Legal Agenda and has been its executive director since 2011. He is also a member of the editorial team of the Legal Agenda-Lebanon and the Legal Agenda-Tunisia. Nizar is a pioneer of the use of strategic litigation in Lebanon to advocate and defend causes related to civil, economic, and social rights and liberties. He is also a pioneer of social policymaking, especially in relation to judicial independence, public property, the environment, marginalized groups, and public and union freedoms. Nizar has published research and helped draft bills on judicial independence, people who disappeared during the Lebanese civil war, people who use drugs, harassment inside and outside the workplace, workers’ rights, and various other topics.

Issam Zeitoun is a graduate of political science from the American University of Beirut and holds a Graduate Diploma in Law from BPP University London. He is pursuing a career as a solicitor while running a fruits and vegetable export start-up in Lebanon that has allowed Lebanese Farmers to market their goods in the EU and UK.

Mona Fawaz is a Professor of Urban Studies and Planning at the American University of Beirut. She writes about urban history and historiography, social and spatial justice, informality and the law, property and space, as well as planning practice, theory, and pedagogy. She researches, teaches, and advocates strategies for more inclusive cities.

Mona Harb is a Professor of Urban Studies and Politics at the American University of Beirut where she is also co-founder and research lead at the Beirut Urban Lab. Her research investigates governance and territoriality in contexts of contested sovereignty; urban activism and oppositional politics; and how people make collective life in fragmented cities. She is the author of Le Hezbollah à Beirut: de la banlieue à la ville, co-author of Leisurely Islam: Negotiating Geography and Morality in Shi’i South Beirut (with Lara Deeb), co-editor of Local Governments and Public Goods: Assessing Decentralization in the Arab World (with Sami Atallah), and co-editor of Refugees as City-Makers (with Mona Fawaz et al.). She serves on the editorial boards of MELG, IJMES, EPC, and CSSAME.